The Mt Bogong backcountry has a reputation for a brutal hike, gnarly terrain and serious avalanche risk. For any snow sports enthusiast getting into the backcountry in Victoria – Mt Bogong and Mt Feathertop are literally the peaks that you aspire to.
Mt Bogong is Victoria’s highest mountain – topping out at 1968m above sea level, so it seems logical that the local aboriginal name ‘Bogong’ means something similar to ‘Big Fella’. 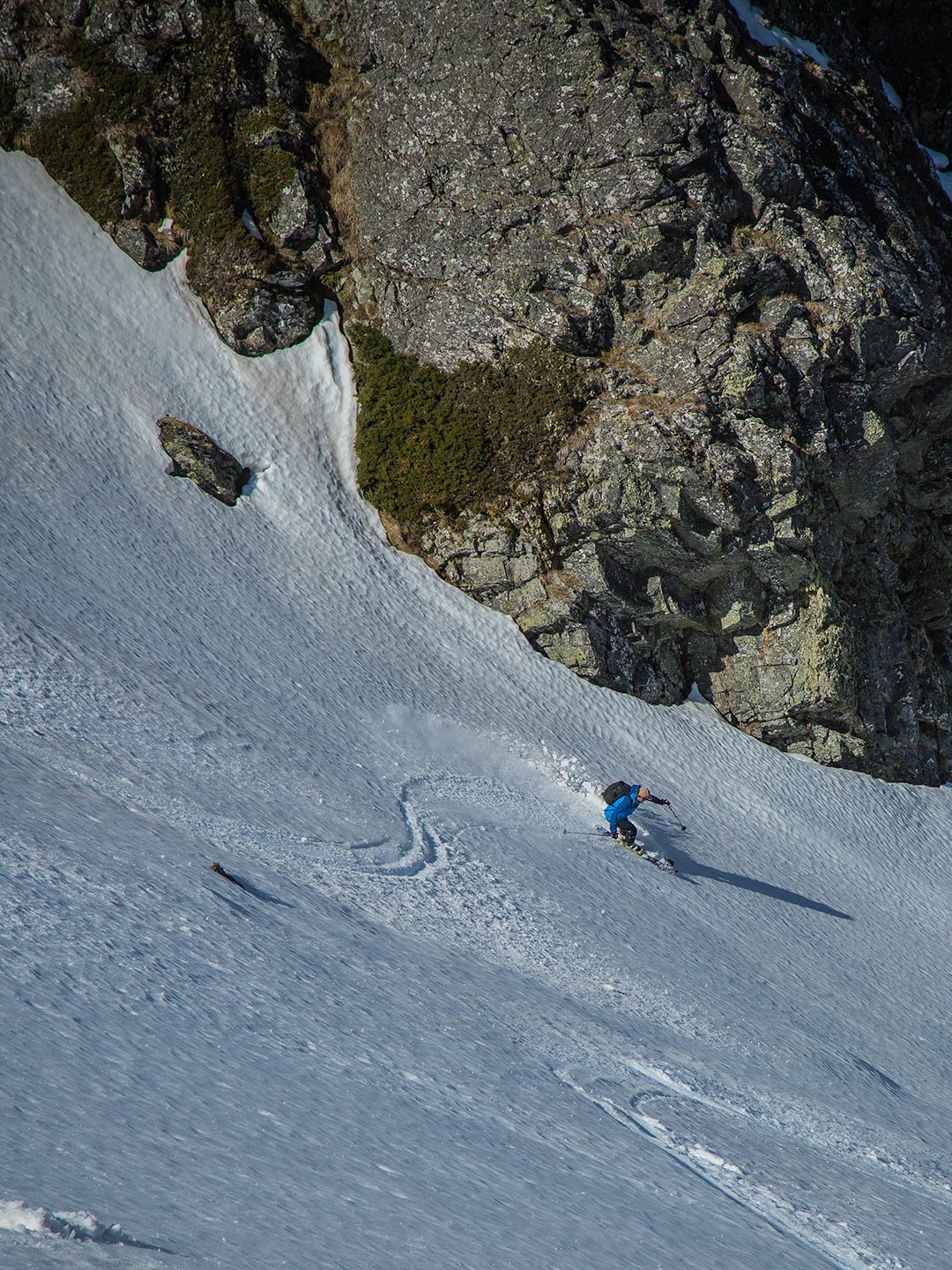 Mt Bogong is only accessible via a few gruelling trails. Steep ascents with heavy camping gear, plus your splitboard or touring skis means that it is only for the fittest and most ambitious riders. The idea of doing the hike in foul weather, sub zero temperatures and slick ice turn off most – so typically spring season is most popular for a snow camping mission to Bogong.
The warmer spring temperatures bring the melt freeze cycle into effect, meaning that riding is typically on sticky corn snow. While corn obviously cannot compare to pow – when the terrain is steep, the runs are long and there is virtually no one else around that sweet corn is pretty damn fun. 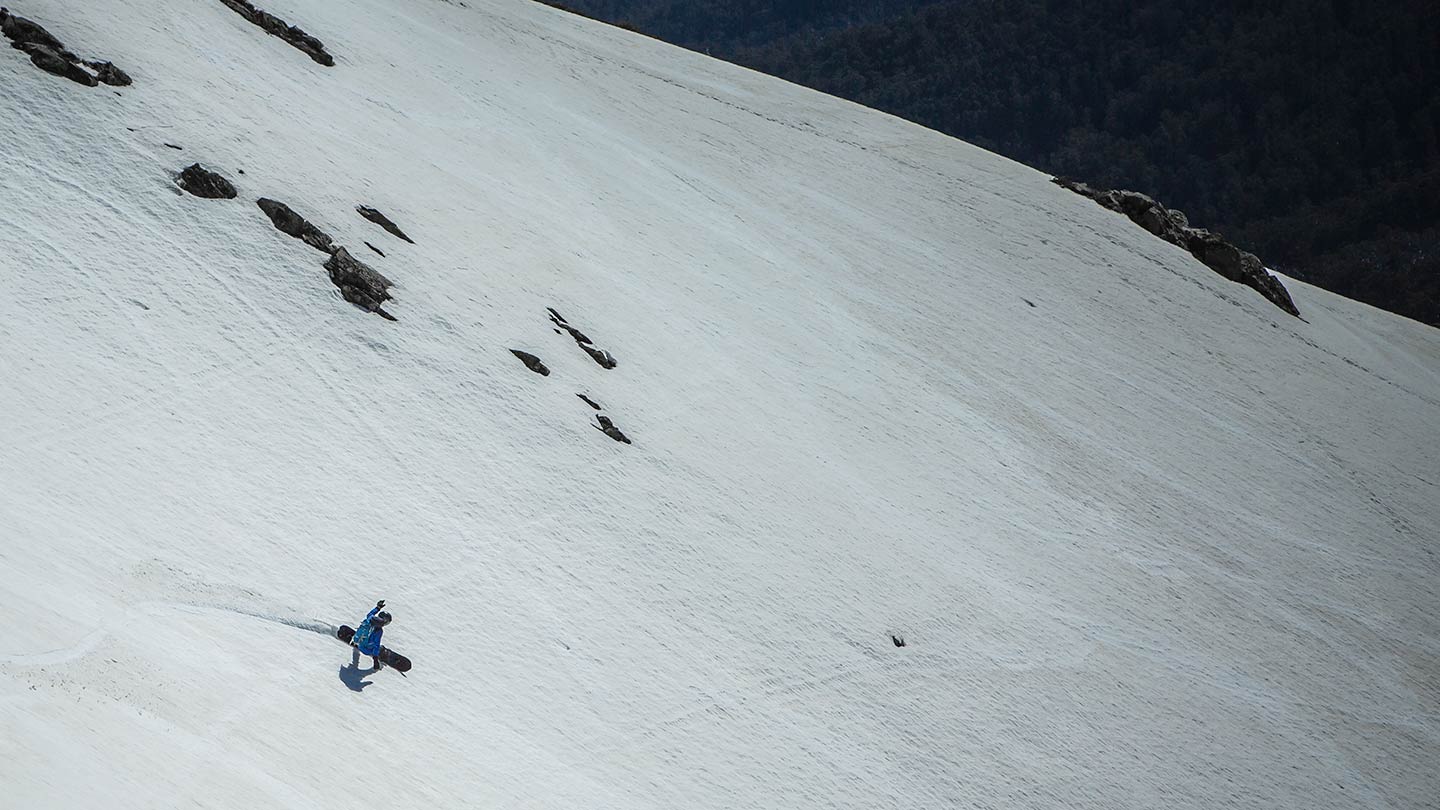 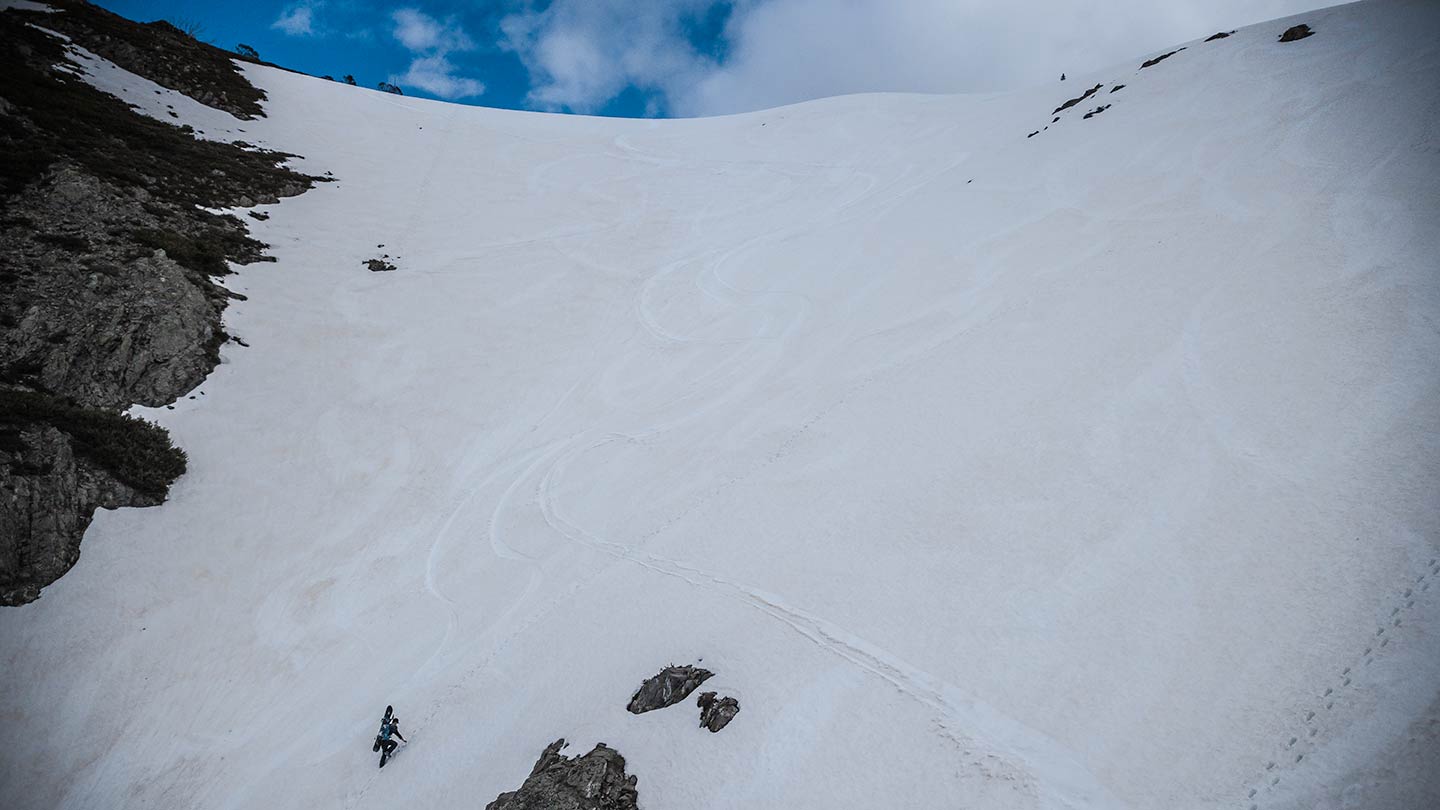 To ride the Mt Bogong backcountry you not only need to be fit, but well versed in managing avalanche risk and trained in avalanche rescue.
With a melting snowpack, the risk of wind slab avalanches are greatly reduced. That being said, there were countless examples of slides from earlier in the season. Mt Bogong has claimed many lives, the most recent examples dates back to 2014 where two friends were found buried up to 5m deep in avalanche debris.
The risks of wet slides in spring reason are very real. Cornices are dropping, and the sun rapidly warms any north facing aspects. Someone triggered a small avalanche an hour before we rode one of the westernmost slopes leading into Cairn Gully.
Avalanches are not the only risks at Mt Bogong, poor visibility and rapidly changing temperatures can quickly change the dynamic of the mountain. As the sun starts to dip on the horizon, the sheltered slopes refreeze quickly and can make skinning up steeper slopes potentially problematic. An ice axe and crampons are a good to have close by in case the weather catches you off guard. 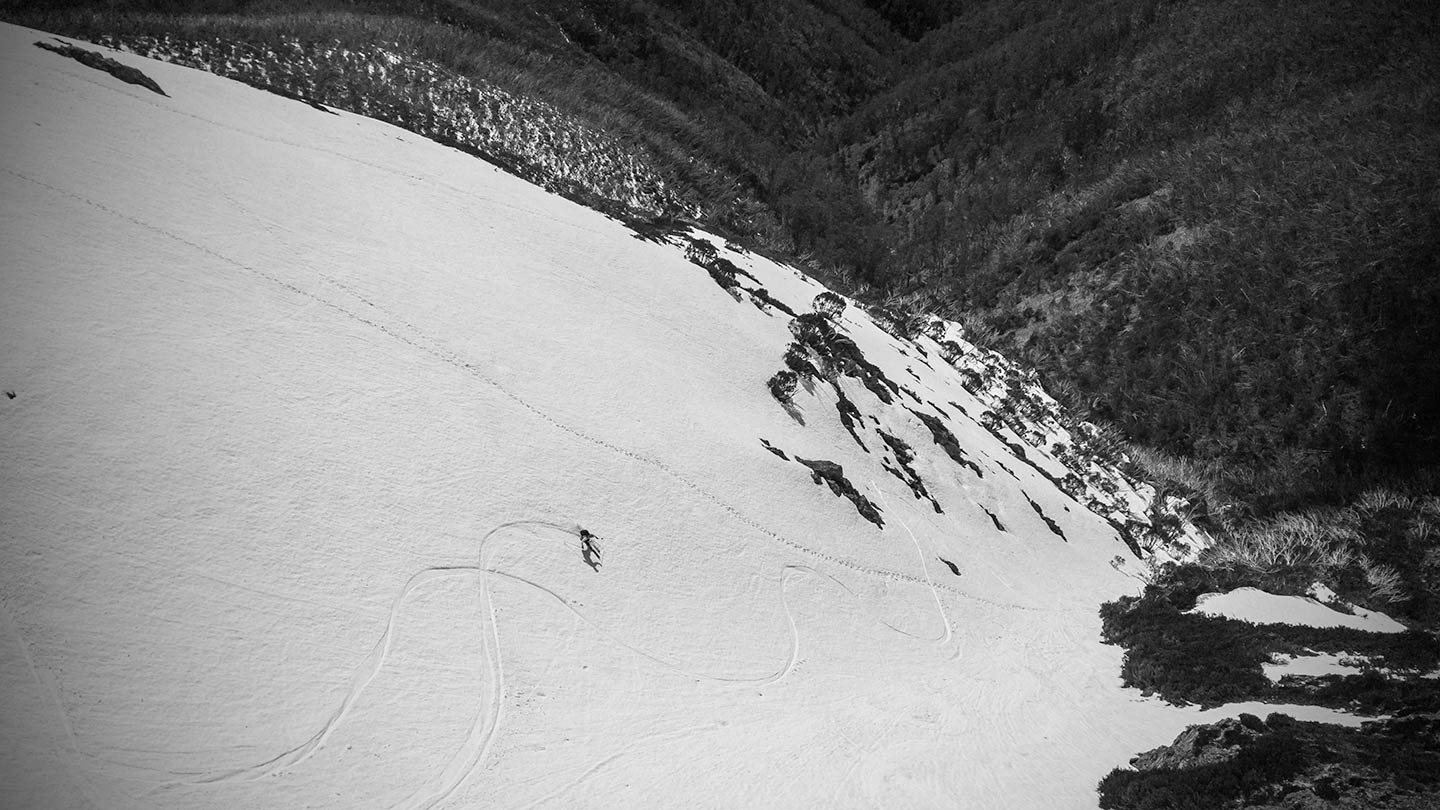 Most of the terrain on Mt Bogong is so steep and starts with a convex roll – you can never see what you are going to ride until you are riding it.
One line we had scoped looked steep and quite tempting but we had no idea if it rapidly turned into a cliff, or was a massive terrain trap in case the snow started sliding. In turns out that a Mavic Pro drone is a great tool for assessing terrain!
From the drone it was obvious that line rapidly converged into a tight gully with dense trees – definitely a terrain trap should things head south. The slope was far too steep to skin out of, so it was going to be a bootpack mission. The morning sun would warm the slope quickly, turning sheet ice into some fun corn snow. If you waited too long, the risk of a wet slide increased dramatically so timing was key.
It looked like the snowpack was actually quite shallow so the apparent risk of a slide was minimal. That was until the second bootpack up the slope revealed a major hazard we had not properly assessed. The slope was wind loaded across the eastern convex section of the bowl. Declan fell more than a metre through the snowpack, which revealed empty space underneath. The slushy snow, was hiding an unsupported hollow that technically could break away without much warning. Sketchy as.
When you are earning your turns, it is a lot easier to feel satisfied with a handful of runs. That brutal hike back up the slope is part of the appeal, and you are always going to learn something new that you would not get sitting on a chairlift. 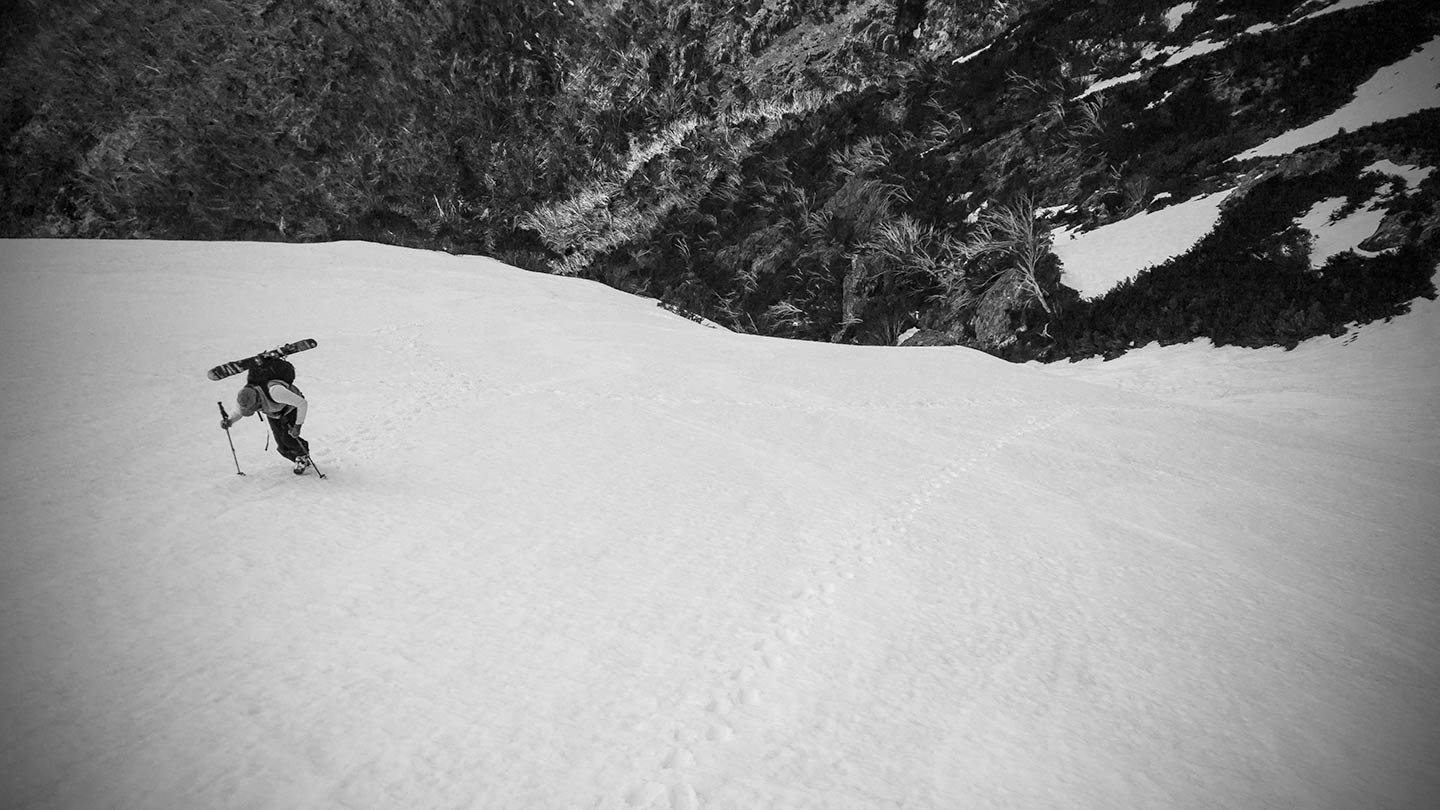 There is not a lot that can compare to a hot drink and something to eat while you listen to the breeze, and the birds slowly quietening down for the evening after a massive day on the slopes.
No other humans are within sight, it is literally you, your friends and the wild. That is all you really need – simple.

No comments to show.